The MV. Captain Keith Tibbetts was an originally Russian frigate used by the Caymans as one of the first artificial reefs.

A relatively young wreck dive is the famous MV. Captain Keith Tibbetts, a huge 330 foot long Russian Brigadier Type II Class frigate that was scuttled on the north shore of Cayman Brac in September 1996. The wreck is known by the name Russian Destroyer #356 and was built in 1984 in Nadhodka, U.S.S.R. She was built for the Cuban navy but the ship hasn't participated in any great battles as long as she was in service. When she was sold to the Cayman Islands, she was renamed Captain Keith Tibbetts to honor a local dive operator.

The Keith Tibbetts is a great dive and one of the few Soviet Union wrecks in the western hemisphere. There are two mooring buoys which are both connected to the wreck. Its conning tower can be reached in waters less than thirty feet deep while it is possible to dive the foredeck's bow in waters of over a hundred feet deep, offering a spectacular multi-level dive. The 2004 hurricane has broken the wreck in two resulting in a lot of debris and metal scrapings near the center of the ship. Its stern sits upright in a north to south direction while the bow nowadays heavily lists to port. You can visit its fore and back turret guns which are excellent photo objects. There are a lot of save entrances where trained wreck divers can look at the inner beauties of this superstructure. Don't enter the parts which are sealed off as there are reasons concerning safety for it.

Most divers will access it by boat but there are some who get here by swimming the 200 yards from shore starting at the Buccaneers landmark. Pay attention to the current which often flows from east to west. Once you are at the wreck, take a good look at our two special residents; a huge shy jewfish pet-named Boris and a large green moray eel named Charlie. Other marine life has discovered the wreck as well and today over 100 species have been documented. The MV. Captain Keith Tibbett is fairly young but sponges and hard corals have already started adorning the fabulous wreck. 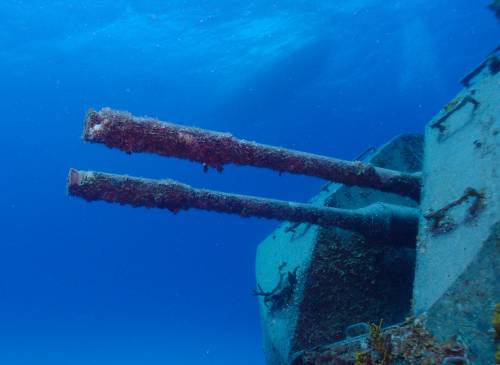 Visit our partners! Or become one.

Carib Sands Beach Resort is a striking new resort located on a sheltered white-sand beach on the south side of Cayman Brac.

Experience some of the world's best diving while staying in comfort at Carib Sands Beach Resort.
[Add Message]Messages from readers: